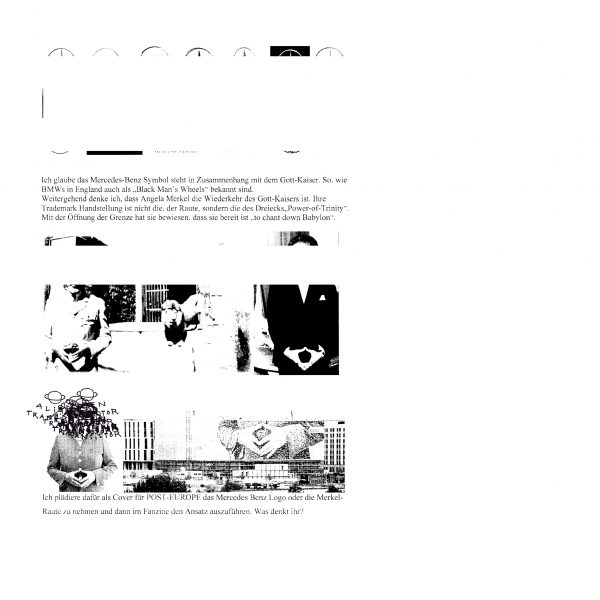 Viscera is stretched out, bursting and tearing open. Ancient pain, which had crawled deep and crept into the most remote folds of their skin, to be sheltered there by eternal darkness, wails and moans as it coils up.[1] And all of mankind’s sorrows howl from the depth of a trumpet: Europe… you nickering ghost! Europe… wretched of the earth![2]

But who or what rolls and rumbles over there in such an ear-splitting manner? A listener’s first impression may suggest the enchanted soundscape of a fatigued electronic soloist, but 1115 are a duo: FEHLER KUTI and GREY provide us with a sonic vision that can only emerge from the synthesis of two radical minds. Think of the meetings of Suicide, Yello or The KLF: A pop big bang of conceptual art and bodily music.

The fusion of FEHLER’s onomatopoeic vocal tracks and GREY’s bass/organ/808-drum machine elements create a unique and original work; an afrofuturistic Musique concrete, which could not be heavier in its psychedelic might. Totally hypnotised, we hear old instruments, lost along an ocean passage. Flutes, spinets and oboes propel themselves through the helium mist out of purgatory towards the light. People Get Ready.

The plot of this supposed instrumental music is, in short, a story of “invisibility”[3] – and of how this invisibility, experienced as negation and extinction, is given a “visually audible” expression through the invention of a new language.[4]

To be part of all the noise and anguish[5] these two phantasmal sound warlocks gulped[6] down several generations of collective experience across the Black Atlantic [7] to spew out something new: An acid bath[8] of gastric juices lends first contours to the invisible’s negative exposures: A thrown-up group photo stretching multiple generations. This musical carcass begins to pulse, and interlinks with overtone choirs and the ephemeral angel dust of deported heavenly children. Thus a new language is born.

It is a way of speaking that resembles the description of a multi-layered[9] or even completely removed[10] graffiti. In fact, it is a description of the existence of humans[11], who live or have lived. Be it in the parallel world of Italian plantations, whose fruits are displayed in supermarkets such as Rewe, Lidl and Tengelmann. Be it in the jungle of Calais[12] . Be it in deportation and social isolation. The European Union, which opened and revealed itself to PoC[13] , does not appear to exist at all.

If we follow 1115[14] down their Underground Railroad[15] , a mythology that becomes more vivid with each station emerges, and takes on a cartographic form. A spatial sculpture made of music! FEHLER KUTI performs the role of the Invisible Stranger – without any use of language in the semantic sense – not in a dissimilar way to Caetano Veloso on Araçá Azul or Miles Davis, though different and novel. Once you understand that Miles Davis did nothing else but tell stories of racism and alienation throughout his career, will you then understand Post-Europe.

Post-Europe is therefore not only music, just as an opera[16] is not only music. Drawn into the deep through subtext and shiftwork, 1115 dive through a stream of electronic music alongside colleagues like Arca and Dean Blunt, Drexicya and Dopplereffekt, as well as Juan Atkins and Moritz von Oswald, Rahsaan Roland Kirk and Sun Ra. But the voices of the libretto belong to the non-musicians and non-artists, the erased and forgotten. The invisibles.

If we listen to the phonograph patiently while playing this music[17] , unheard sounds surface. In time, voices tear off, and become distinct. They say what they need to say. They let others speak. And suddenly there is a space… that unfolds, that speaks. Deep inside it, an ancient lament emerges, wrapped within the invisible words: What did I do to be so black and blue?

1115 don’t simply play on a stage in front of an audience. They absorb time and space![18] Last December, they could be experienced at the legendary Alien-Disko-Festival at Munich Kammerspiele.

Post-Europe was produced by Markus Acher and Cico Beck (The Notwist, Joasihno). According to the rules of pop music, this record should not even exist.[19] The sirens are booming. The dance floor is ready. It’s just getting started.

Text by Pico Be

[1] See Miles Davis, Aura, Columbia Records, 1989. A comparison, that allows us to take a detour via Aura’s release date and cite another historical event of that year: The fall of the Berlin Wall in 1989. Mere three years later, the pogroms of Rostock-Lichtenhagen. The ugly German becomes visible again in the same year as the European Union is founded upon the historical burden of the sauvage européen (WWI: 20 million dead, WWII: 50 million dead).
[2] In the words of Frantz Fanon in Les damnés de la terre, Edition Maspero, Paris, 1961: “For centuries Europe has brought the progress of other men to a halt and enslaved them for its own purposes and glory; for centuries, it has stifled virtually the whole of humanity in the name of a so-called spiritual adventure.”
[3] See Ralph Ellison, Invisible Man, Random House, New York, 1952.
[4] See James Baldwin, The Fire Next Time, Dial Press, New York, 1963: “For the horrors of the American Negro’s life there has been almost no language.”
[5] See Ralph Ellison, Invisible Man, page 9.
[6] See Karl Bruckmaier, The Story of Pop, Murmann, Hamburg, 2014, page 291.
[7] See Paul Gilroy, The Black Atlantic, Verso, London, 1993.
[8] also 1989: The Second Summer of Love – Acid-House lands in the UK: The Roland TR-808–Rhythm Box, also used by GREY, shapes its sound just as it had already moulded chart hits by Whitney Houston (1987) and Phil Collins (1981).
[9] also 1989: Inspired by a reading of Invisible Man, Queen record a song by the same name.
[10] or: What kind of images does the world-leading picture-book publisher Taschen present? Let us take a look at a photo album from 2013 entitled Wirtschaftswunder, in order to get the German fairy tale of the post-war miracle. Neither black GIs nor “brown babies” disturb the picture, but above all THEY are missing: the mass of migrant workers, called Gastarbeiter, who built up Germany’s economy. Not a single photograph of the factory workers can be found. There they are, the invisibles. Stop! One single photo shows a sole person of colour – beside a white teacher, who gives him lessons at the blackboard. The caption reads: “Germany presents itself cosmopolitan.” The photo is one of the few black-and-white pictures in this volume.
[11] The approximately 4800 children who originated from the African-American-German relationships were exposed to covert and open discrimination in the post-war occupation zones and later in the young Federal Republic – their mostly unmarried mothers suffered a similar fate, as they were often abused as “nigger whores” or “fallen girls”. Both German and US institutions sought to dissolve the scandalised relationships. The US soldiers were often sent to distant places or later even to Vietnam. They were advised to abandon their German partners. Thus the children became legally fatherless. And the mothers were forced by the social welfare offices (that were shared legal guardians) to put their children in special homes for “mixed race children” and to release them later for adoption. When in 1952 the first of these children started school, the “Problem of the Negro children” tackled head on. Most of the children were deported to the United States and Denmark and put up for adoption. At times, these children were solely adopted for the purpose of slave labour. As soon as a mother signed a declaration of consent for anonymous adoption, she lost all rights regarding her child, to investigate its whereabouts or even keep in touch. Hundreds of “Brown Babies” were moved to African-American adoptive families in the United States. This program was called the Brown Baby Plan.
“… these mixed-raced children, who are not suited to the climatic conditions of our country. It has been considered, whether it would be better for them to be taken back to their father’s homeland” – Luise Rehling, Christian Democratic Party, Parliamentary Debate, March 12, 1952.
[12] The Calais Jungle (French: jungle de Calais/German: Dschungel von Calais) was a slum near the French port town of Calais, and first mentioned around 2002. The same year the first season of I’m a Celebrity… Get Me Out of Here! aired in the UK, a TV show that would become popular in Germany as Das Dschungelcamp. The Calais Jungle received wide media coverage in 2015 at the height of the so called “refugee crisis”, when it was reported that over 10,000 people waited there hoping to get to the UK through the Eurotunnel. In October 2016, three months after Brexit, the camp was purged and declared closed.
[13] Person of Colour (Plural: People of Colour)
[14] See 1115, The Drowned World, Alien Transistor, Munich, 2016.
[15] See People Get Ready, written by Curtis Mayfield, recorded in 1964 by The Impressions. The lyrics retell the story of the legendary Underground Railroad, no literal railway line, but a secret infrastructure, that helped enslaved African Americans flee from the South and seek refuge in the Northern free states.
[16] Ras The Destroyer follows Boris Johnson as the Invisible Man’s final antagonist. The character of Ras is modelled after Marcus Garvey (see Ralph Ellison, Invisible Man, Random House, New York, 1952).
[17] See Ralph Ellison, Invisible Man, page 8.
[18] See Carl Einstein, Negerplastik, Verlag der Weißen Bücher, Leipzig, 1915: “The Negro sculpture absorbs time by integrating elements that we experience as history, in other words: action and movement, into its own form. Vista or usual frontality are forbidden here…” [translation by the author]
[19] See Beyond Yr Black Ark, the final track on Post-Europe: Lee “Scratch” Perry grew increasingly reluctant to rely on other recording studios for his productions, so from 1973 onwards he built his famous Black Ark Studio in Kingston, Jamaica. His sound differed radically from many of his contemporaries. Perry claimed that he himself only recorded four tracks, “twenty others I have received from alien powers”. In 1979 the studio went up in flames under unexplained circumstances.