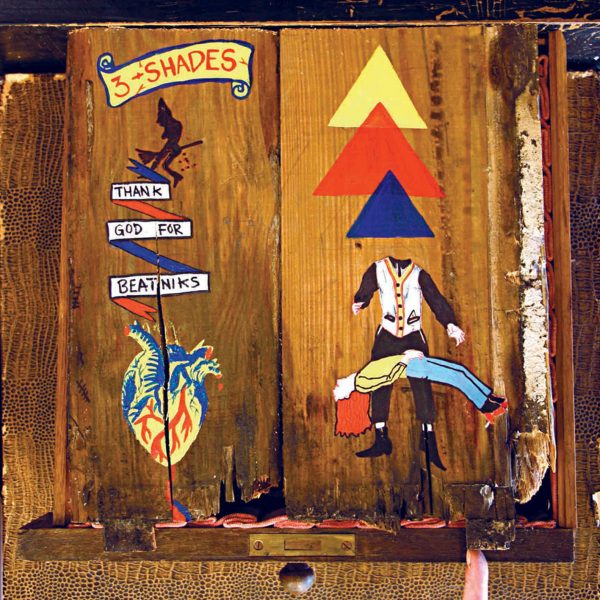 3 Shades is a collective of musicians (and guests) that one could call a “Supergroup”. Based in and around Munich/Germany the group was founded 9 years ago. Famous for their rare but exciting live performances it was just a question of time before they released their debut album. And they had time. But now the waiting is over and “Thank God For Beatniks” is ready to enter/penetrate your ears.
3 Shades are four well-known musicians – in Munich, Europe and around the world.
First we have Ivica Vucelic (Dis*ka, Die Regierung, Ligthnin’ Ivi, well known dealer of vintage bicycles, cook and promoter of the famous Club2) on guitar, pedals and vocals. Carl Oesterheld (Carlo Fashion, F.S.K., MS John Soda, Tied & Tickled Trio) plays organ, harmonium, glockenspiel, metalloph. Markus Acher (The Notwist, Tied & Tickled Trio, Village of Savoonga, Lali Puna, 13 & God) plays drums, organ, percussion and sings. His brother Micha Acher (The Notwist, dem Tied & Tickled Trio, MS John Soda) plays bass, organ, trombone and trumpet. on and percussion.
On their debut record “Thank God For Beatniks” the band explores soundscapes, rhythm-patterns and moods in mullticolored shades. Some of them filled with whirling sunbeams, others covered with smokey dust.
The opener “Bombay Can” sets the key. A throbbing as well as bitter-sweet harmonium lures you into a hypnotic groove-monster, filled with echoes from the past and future. More spin around melodies are offered on the next track: “Subsequently” with hiphop activist Fat Jon as on guest vocal. And that’s a good choice. Because without his thrilling spoken word rap this number would suck you in and never spit you out again. “El Topo”, named after the famous Western by Alejandro Jodorowsky from 1970 is simply like the movie. A surrealistic trip into a psychedelic desert, filled with audio hallucinations, a jazz mirage and some obscure ecounters with mexican border experiences. More psychedelic moods, but with a darker color offers “Tiny Bits Of Terrible” with guest vocalist and spoken word legend Mike Ladd. At first, it sounds like we have entered into the wonderland of little Alice, but the beats are dented,, the whizzing sounds are too eerie and nearly everything is filled with smoke. And don’t forget the voices inside your head. It’s sheer madness that rules this Neverland. And so “Thank God For Beatniks” gives you a break. This tune gives the record a new tone. Based on lyrics by Afro-American beatnik pioneer Bob Kaufman it opens the Sunday morning regions of beatnik lifestyles. And here everything is possible. Like in “Sometimes Up” – just listen to the abstract ambient sounds transform into a melancholic lovesong. “Counting The Days” sets the scene in some kinda beatnik kitchen. Guest vocalist Jihae Jean Meek (The Royal We, The Champagne Socialists) sings like the night was long and the acoustic guitar makes noises far beyond the simple string sounds.
But above all this is music as a collective happening. 3 Shades share no love and interest in egomanic and individualistic expression.
Maybe it’s some kinda jazz. But spelled wrong and with other results. Maybe it’s a quest for all the promises made about music and freedom.
“Thank God For Beatniks” is not an answer to all these subjects, but 3 Shades asks the right questions.