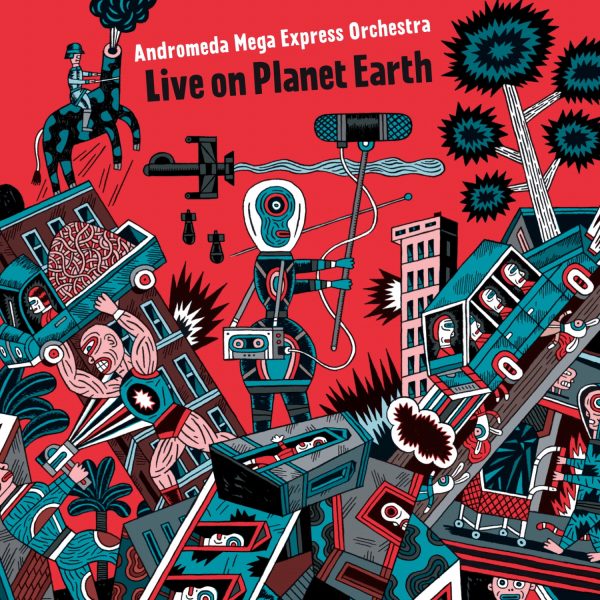 Ever the loose cannon, the Andromeda Mega Express Orchestra remains reliably unpredictable with their third album for Alien Transistor: renowned for their elaborate and intricate studio recordings, the genre-smashing 18-piece Orchestra didn’t even set foot in a studio this time around, but instead returns with a live album, recorded in May 2012 at Berlin-Neukölln’s Heimathafen.
“Stimmung In G”, Live on Planet Earth’s opening track, already makes it clear that the new album marks a distinct stylistic departure for the Orchestra: Instead of presenting the kind of sonic splatter/comic styles they’re known for (as showcased on BUM BUM, their previous full-length), bursting at the seams with new bits of information at every turn, the album opener features a surprisingly coherent and steady layer of sound that’s more reminiscent of Ambient music. Lacking the fragmentary patchwork approach of previous recordings, Daniel Glatzel, the Orchestra’s leader and main composer, even describes “Stimmung In G” as “something to clear the air,” allowing listeners to forget preconceived notions about AMEO and start from scratch: exposed to this kind of track, they’re ready to deal with the unexpected.
The Orchestra’s last album BUM BUM was all about clashes of polar opposites: Some tunes felt like standing on a field of flowers, complete with windfalls, but at the same time they also felt like a visit to a bulk garbage dump or a crammed second-hand bookstore. In contrast to this, Live on Planet Earth leaves decidedly more room for individual statements, for ideas and textures to emerge; in other words: It’s a lot easier to tell what’s actually going on in the new songs. That’s not to say that Andromeda Mega Express Orchestra – part avant-garde salon orchestra, part alternative Jazz big band, part audio logistics center – want to revoke or amend the bold grandeur of their earlier material; instead, it’s simply a new and more collective-minded direction, a consequent next step that’s as surprising as it is staggering.
Despite its inconvenient size and refusal of genre-labeling, the Andromeda Mega Express Orchestra has been – believe it or not – a steadily working band since its inception in 2006. Of all their releases, Live on Planet Earth probably showcases best how this group of musicians deals with its own unique diversity: highlighting the individuals’ approaches and statements, but working together, as an entity – really: acting in concert –, more so than ever before.
It is thanks to this emphasis on a truly collective approach that the new album sounds more “symphonic” than its predecessor (which daringly veered towards Techno or Musique Concrète at times). However, when Glatzel mentions the band’s “organic interplay,” this doesn’t mean they lost their sense for eccentric, shrill and humorous ideas; neither does it mean they didn’t use electronic instruments while recording Live on Planet Earth. They did, but the various electronic elements are more subtly interwoven into the tracks, not at all sounding like anything you’d expect from electronic music. On the final track “W.A. Mozart vs. Random Generator”, for example, they do indeed make use of a random generator, as explained by Glatzel: “Johannes Schleiermacher, who plays baritone saxophone in the Orchestra, approached me one day and said that he’d written this software that can digitally alter musical scores: It allows him to control the level of random material and chance elements added to the original material. Using this software, we contaminated one of Mozart’s compositions, and yet our string quintet performs the mutation with the same attitude and sincerity you’d expect from a Mozart performance. It’s a staggering new version. Some passages sound exceptionally wild, others more like Schönberg’s later works. The chance elements seem to have definite outlines, because our brains are constantly coming up with new sets of associations – or, our minds surrender and give in to this beautiful, meaningless void. We staged this track like a proper boxing match, hosted by one of those old gaming consoles from the eighties.”
And when the last note has died away: a hurricane of applause. Live from Planet Earth is a live album that not only documents a huge logistical challenge: Here, the Andromeda Mega Express Orchestra leaves the safe studio environment behind and enters the stage to underscore and reaffirm its position as one of the leading large ensembles for extravagant soundscapes of everyday life.