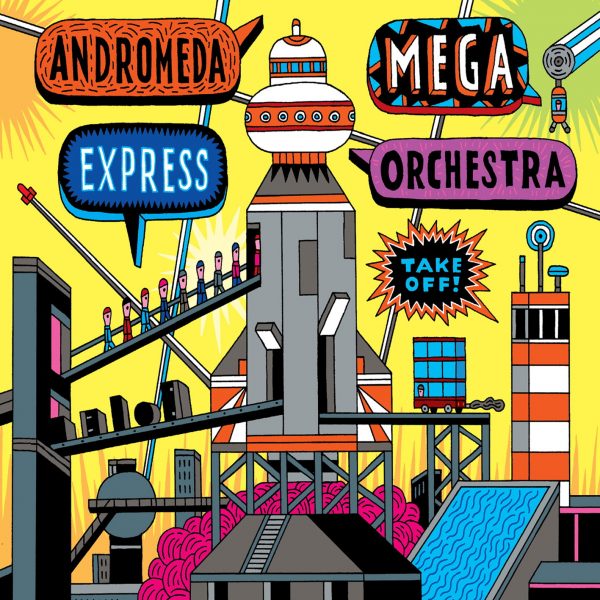 Whoever claims to have heard anything like this before must be lying..The twenty-piece ANDROMEDA MEGA EXPRESS ORCHESTRA, led by 25-year-old Berlin based composer Daniel Glatzel, set off a firework of energy, musicality and fresh ideas and juggle genres, styles and musical references in a way that can make you dizzy. Jazz doesn’t begin to describe it. We’re talking about everything from minimalism to film scores, romanticism, modern classical music, and Bartok right through to Frank Zappa. Glatzel also cites computer games, cartoons, shabby infomercials and elevators in expensive hotels as influences.
The music of AMEO is so rich in direct or indirect quotes that you really don’t know where to begin. Take Off! is true to it’s name – the album is wild, headstrong, haunting, atmospheric, funny, disturbing – all at once. Pulling out all the stops, Glatzel uses musical registers from varied cultural references and alarmingly crazy time signatures, all with a nonchalance which borders on the outrageous. Big-band swing is interrupted by free-jazz cacophonies, and excerpts from crime movie soundtracks are mixed with fanfares of imaginary film production companies. All of a sudden the blissfully elated mood will shift to its opposite and we find ourselves in the middle of oppressive, sprawling soundscapes where all is boundless and wonderful.
The AMEO are 20 young musicians all from differing musical and cultural backgrounds – from Germany, France, Switzerland, Canada, Norway, Japan, Thailand, the Czech Republic and South Korea. As leader, composer, arranger and woodwind player Glatzel is responsible for the record’s concept as well as for composition and arrangement. AMEO have already left Korean concert halls and Bavarian provincial backwaters astonished, and occasionally frightened, with their harmonic adventures and rhythmic madness.That each individual member of the orchestra must bring with them stylistic openness and the highest possible joy of playing goes without saying. It’s a debut that leaves you asking what can possibly follow it.