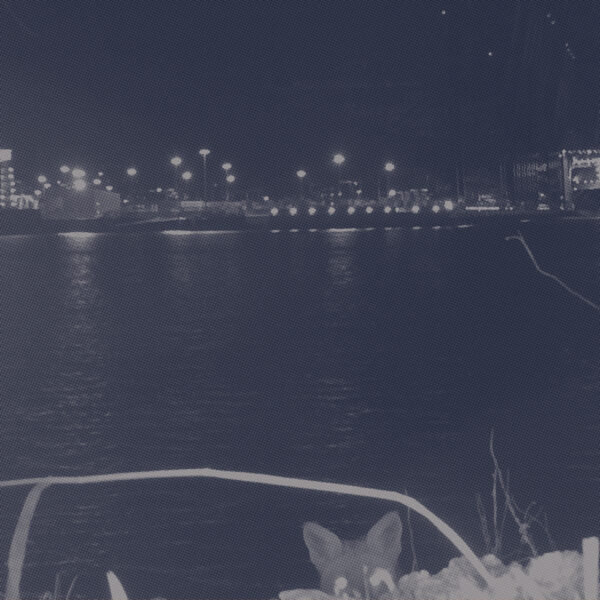 Fuchs is a band that never was. It vanished as quickly as it appeared in the picture, much like the
animal that can be seen on this album and after whom it was named. In 2005, Kante singer and
guitarist Peter Thiessen travelled to Weilheim to visit Markus and Micha Acher in their studio,
where they were joined, among others, by Notwist-affiliated musicians like Cico Beck, Robert
Klinger, Carl Oesterhelt and Stefan Schreiber. Spirits were high, but schedules were full: after a
week of improvised sessions, everyone went their own way. The recordings gathered dust until
Markus Acher found them again in 2021 while cleaning out his studio. After carefully re-evaluating
the rough mixes, the musicians decided to finally release them. The resulting album comprises six
tracks that musically draw on jazz, aesthetically lean on dub techniques and ideologically pick up
on krautrock: there’s no solos to be heard on this record, just a few equally skilled and open-minded
musicians listening to each other carefully, providing each other with space in which to unfold.
»Fuchs« is a document of egos dissolving in a collective spirit.
Thiessen and the Acher brothers met in the 1990s and bonded not only over their shared background
in hardcore music and the DIY ethos in which it was rooted, but also over their love for jazz. »If
you look at those two things combined, you will eventually become convinced that you don’t have
to be formally trained to make music that at least resembles jazz«, says Thiessen today. He invited
Micha Acher to join his band Kante on flügelhorn in 2004 for a tour that saw the expanded group
play unusual encores after the official concert was over. »Micha had taught us some dixie pieces, so
night after night we would play a freestyle dixieland ska set in front of the remaining audience!«
Naturally, the Acher brothers didn’t have to ask twice when they invited him for a visit in Weilheim
to further explore their mutual interests in a studio setting. »I got on my way immediately and took
two or three loose ideas, a tape echo and a guitar on whose headplate you could create fantastic
sounds with me«, says Thiessen.
Between immersing themselves in books by the photographer Leonore Mau, cooking together and
drinking the occasional fruit schnapps, the trio went into the studio. Says Thiessen, »Micha brought
his flügelhorn and some wonderful ideas with him, Markus an Indian harmonium and a plan, Carl
Oesterhelt came with a glockenspiel and a Chinese zither and a bunch of amazing jazz musicians
joined in, too.« He considers the resulting recording sessions to be a kind of attempt at musically
translating their conversations during those days. They discussed different approaches to jazz,
whether sampling and musical miscitations can unlock ecstatic potentials and the possible parallels
between syncretistic religions and pop music. »There’s traces of glossolalia, it’s like a blurry
séance«, adds Thiessen in regard to the sessions.
It is especially this spirit that managed to live on even though the recordings themselves were
abandoned. »What we all liked most when listening back to the recordings is probably their
marginal and fragmentary character, the empty spaces—the moments in which the virtuoso solo
never comes, in which the centre remains empty.« The six pieces on »Fuchs« are chock-full of
exactly these moments. When at one instant, the players seem to disperse and improvise freely, they
always meet again on common ground a short time later, continuing on their way together. There
are no conventions or even previous agreements that guide them, just a shared will to explore a vast
range of curious sounds and unusual rhythms together as a truly unified constellation of very
different musicians. Fuchs is a band that never was. Its ideas still reverberate vividly even 17 years
later.