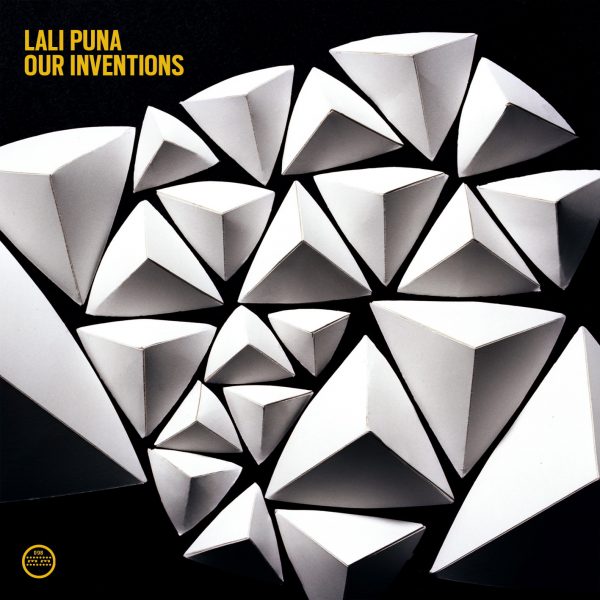 More than half a decade has elapsed since the release of Faking The Books, Lali Puna’s third (and hitherto most recent) long-player, but the band’s impact on the climate of electronic rock music remains palpable. Along with sister-group The Notwist, this Weilheim quartet have helped map out the musical landscape for modern, experimentally minded pop music, and Our Inventions finds Lali Puna continuing to push the frontiers of their medium.
‘Rest Your Head’ serves as a perfectly poised re-introduction to the band and all they’ve become. Initiated by waves of glassy pulsations and warm, swelling synths, the song has the feel of a reverse-lullaby – gently winding its way through reposeful melodies, guided by the welcoming whisper of Trebeljahr’s vocal until the final third kicks in with drum machine hits, and you’re wide awake. While Faking The Books, with its vibrant riffs and extrovert tendencies, had the sound of a record begging to be played live, Our Inventions exhibits the hallmarks of an album spun from intensive studio-bound introspection. Two of the most explosive and ebullient songs here – ‘Remember’ and ‘Everything Is Always’ – confirm so much of what’s special about Lali Puna: all the elements are at once precision engineered and delivered with absolute heartfelt conviction; perhaps never before have such jubilant pop hooks been so meticulously and fastidiously crafted, yet you can always hear the soul behind these machines.
This is an album that’s made for and about the modern world, concerning itself with the driving forces of progress and technological obsession. Trebeljahr’s lyrics are suggestive of alienation and disenfranchisement from nature during the irony-laced title-track: “The birds in the trees/Singing our mobile melodies/What a sweet, sweet world”, later stipulating that ‘progress’ never really gets us anywhere on ‘Everything Is Always’ (“Nothing new/These days”), while hinting at the ultimate bankruptcy of the all-devouring consumer age during ‘Safe Tomorrow’: “Never going anywhere/Don’t stop by and get to know/Stuff your memory with facts/Save Save Save”.
The final song on the tracklist is ‘Out There’, a collaboration with the Yellow Magic Orchestra’s Yukihiro Takahashi. The version appearing here is an alternate rendering of the track that appeared on Takahashi’s Page By Page album in 2009. Here Trebeljahr addresses the global financial collapse (“Their kingdom’s past, their kingdom’s gone/Just ruins and plain desert/It’s all burnt down, we’re left alone”), and sure enough, Our Inventions is a body of work that keenly engages with the concerns of its time, one that confronts the excesses and ever-accelerating pace of modernity.
The sublime, virtuoso electronic arrangements of Our Inventions directly lock onto the record’s recurrent key themes, depicting a world inundated with technology and consumed by a fixation on progress – simultaneously passing commentary on this state of affairs and overcoming it. When Trebeljahr intones “Things move on/I’m gonna work fast because tomorrow comes quick” it sounds like it’s being sung from the perspective of someone who’s already there.