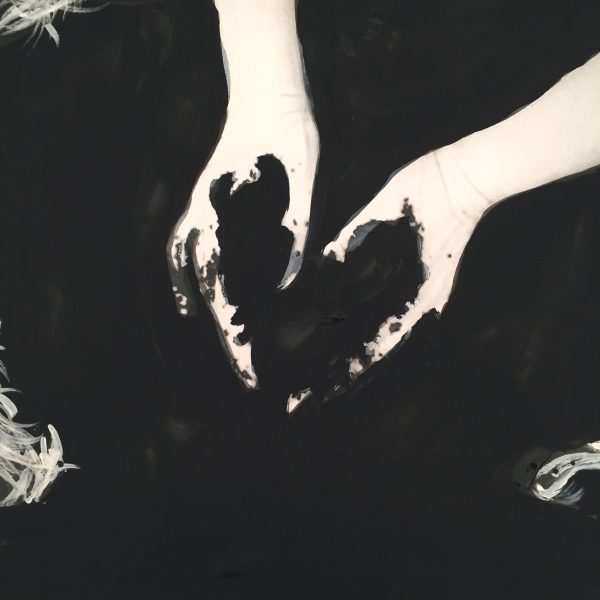 A raven is the theme in the video collage “The secret garden” created by his partner Nana Dix, to which he contributes the soundtrack. The renowned Munich artist is intensively connected with a devout fascination for this mythic animal, whose contours already graced the cover artwork of “Helldunkel”, and which appears as a symbol of treason and sinister premonition, but also represents generosity and wealth in many cultures.

All these contradictions and ambivalent emotions are considered in Nana Dix’s work; Protein weaves a sound carpet that fits. Beginning with meandering sound layers and shifted delay effects, a rhythm emerges, rising slowly from the depths to the dark surface, clicks and cuts, in their gracile aesthetic at times reminiscent of Mouse on Mars. After a while kraut rock guitars join in, propelling the listener into the secret garden, where the shadow of the raven ascends above the ground and his croaking leads to the portal of the parallel world.

Protein cites and paraphrases the inspiration which he draws from artists like Neu! or Harmonia, decouples it from its past and treats it with dubby distortion, kinda Vladislav Delay style, whom he really appreciates beyond all measure. Build-up and decay, in constant flow, no beginning, no ending, and above all these things thrusts the anthracite shimmering plumage of the raven, under whose wings life and death, but also hope, honour and illusion are equitable partners.

Protein’s new masterpiece is highly recommended to everybody who is into artists like Notwist or Console, but also for Aphex Twin or Tim Hecker followers. There will be limited run of 100 copies for quick listeners, each hand numbered by Nana Dix, which will also include the full length video on DVD.