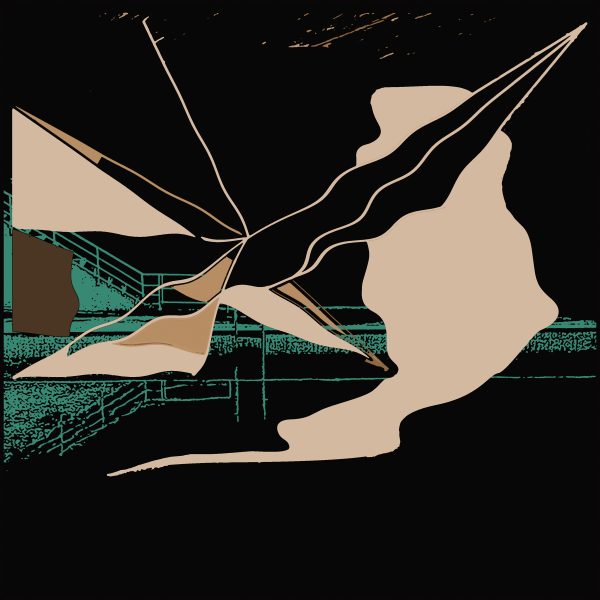 Click-clack – click-clack – click-clack: The beat of riding on a train before the invention of pneumatic suspension was no jazz. But combined with the landscape passing by the window its steady pulsing beat had consequences: digressing thoughts, imagination kicking in – roll it!
This principle can be heard on Saroos’ third album. The three band members, who live in Berlin and Munich, toured Italy by train numerous times. They liked it a lot, they say. You travel more slowly, you tour at low revs, with enough click-clack to make it click in the head
Take “Tsalal Nights“. A rhythm, straight as if drawn with a sewing machine, yet the music lets your brain whir casually and playfully in all sorts of directions.
Retro-futurism in a slightly psychoactive form – more H.P. Lovecraft than Jules Verne.
“Spiaggia di Pluto“ throbs in extraterrestrial chill, but with the stylish coolness of a Kubrick-Space-Lounge in the year “2001“, whereas ‘Kraken Mare” lets the listeners float through a sea of glacial sounds – and then, in the closing moments, tugs them in a rhythmic eddy.
Compared to their earlier albums, the beat seems so unrestrained that the sound has sufficient room. Sometimes jungle-electro-exotica wobbles through the undergrowth of sound in elliptic circles (“Willow“), sometimes the foghorn strikes up a savage dub (“Seadance“), as if King Tubby was circulating through the analogue nirvana after a particularly massive spliff.
This makes the album not only more organic, but also more social. More man, less machine. When guests came round in the studio, the samplers remained turned off. This, of course, leaves marks. Not all as big as Fenster’s Tadklimp, who contributed a bagful of sounds and had his fingers on the mixing console. Whoever expected a jam album from Saroos? But this is it.