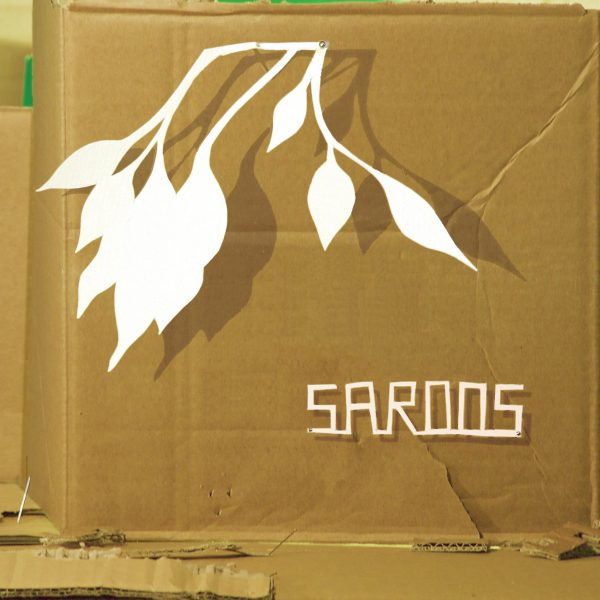 Saroos is the imaginary, remote place where this remarkable album came into being.
Saroos are Florian Zimmer and Christoph Brandner.
Their debut, of the same name, is filled with spacial-rhythmic causes.
It’s a real bay – music lying calmly in continuous movement, open and harboured at the same time. Saroos’ maximal minimalism disproves the notion that electronically adept drummers prefer affective beats to filigree procreation. At least here it is the other way round: Soft slivers of sequences, mysterious, subcutaneous.
Where toms pound the kickdrum, a buzzingly beautiful vault of rhythm is upraised. Filigree bevies of staccato striae and clearly structured soundmixtures. Sometimes a metronome ticks through, then you hear the echoing detachment of well known clusters. What is happening here is what we call a stream. In the deep substream, close to the ground, Saroos’ significantly accentuated soundmaterial and immaculate guitar-branchage drift towards percussive rock.
The distance to the surface is shortened intermittently, the music led into calmer basins, only to take the next segment deeper still. A water-sprite awakes with a start, it is Anticon’s Alias learning „DuringThis Course“, followed by the fiction of what was just to be heard: on hearing „Everyone Was There“, the pixies of Andrew Weatherall’s „Sabres Of Paradise“ meet for a shadowy tryst, and through „One“’s veil of algae, even Slint’s ghosts are to be seen. The threatening tangle back there, was it just an effect of „Troubled Sleep“? What is played, what is acoustic, which antenna is transmitter of what? Saroos’ world develops according to an intuitively planned inspiration: not in rank growth, not like a swarm, but rather calmly, avoiding the safe road for a chasm, doing brilliantly in a fog.
Saroos, who are they? Lava in a fast version, time to music, a percussive album in melodic twilight.
Peculiar, catchy and life-sized.