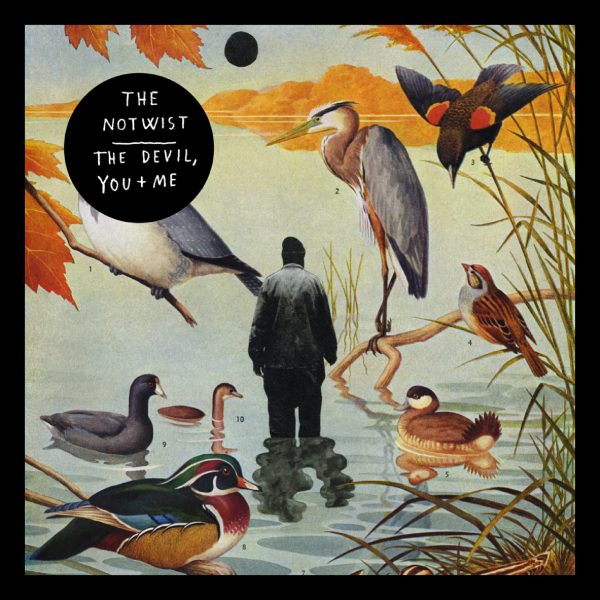 On first listen, “The Devil, You + Me” greets you like an old friend. Markus Acher’s singular voice surrounds you with all the comfort of familiarity, the euphoria of re-acquaintance.

It takes a while before the words and the scale of the musical language sink in.

This is an album driven by an individual and collective restlessness, something that manifests itself both in the endlessly inventive musical construction and the submerged lyrical narrative that hits you from the astonishing opening “Good Lies” all the way through to the fragile end-piece “Gone Gone Gone”. The lyrics explore a world of uneasy being, structured like incantations formed to ward off the inescapable cycle of life and death, falling back on archetypes, religion, God and the devil himself. Acher seems to be resisting the inevitabilities of mortality, fighting the physical certainties of the world around us – “Gravity you won’t get me. Old gravity you won’t get me…”

Aided by the suitably stellar ‘Andromeda Mega Express Orchestra’, ‘Where In This World’ is another breathtaking moment, deploying strings and orchestration in a fashion that greatly transcends the usual pomp and circumstance of rock groups with big budgets: this is more like Morton Feldman as filtered through an array of carefully underplayed electronic treatments. Immediately after all that, ‘Gloomy Planets’ sets about stealthily burrowing its way under your skin, setting out simply with a few well-placed guitar and piano chords only to build incrementally toward a stately, emotive swagger that never quite spills out into overstatement, or all-guns-blazing crescendo. It also just happens to be one of the loveliest songs this band have ever written.

There’s a constant dialogue between The Notwist’s hard rocking past and their more exploratory tendencies, but it’s the gradations that lie in between those two extremes that make them unique. It sounds like these guys have spent those past six years reforming as eleven different bands, tackling each one of the songs here from an entirely different angle.

There are very few groups who could make sense of material like ‘Your Alphabet’, a piece which combines droning 20th century dissonance with ear-shattering, electronically hacked percussion – only to somehow produce an actual, coherent song at the end of it all. That’s a trick you’d ordinarily only hear someone like Radiohead or Wilco pulling off with any degree of success, but on ‘The Devil, You + Me’ The Notwist propel themselves into the same stratosphere as bands of that order. For all their inclinations towards the avant-garde, importantly, this is a band who know when to play it simple as well: a little further down the line you find yourself confronted with the sheer eloquence of acoustic rocker ‘Boneless’, a three minute power surge fusing motorik rhythms with restrained yet hugely effective arrangements, quietly weaving strings and harpsichord into the very fabric of the song.

Elsewhere, Acher asks “where in this world could I go but to the chord that takes me away…?”.

And you’re suddenly filled with the hope and promise that although it may take a while,

this isn’t the last we’ll have heard from him, or this incredible band.