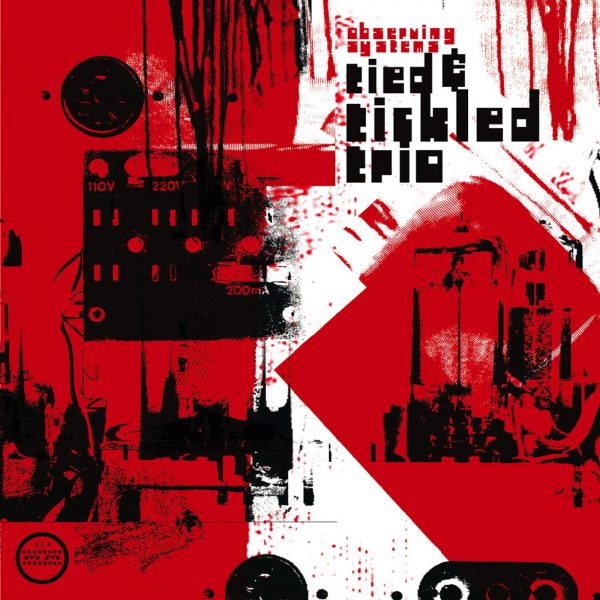 With their third studio album “Observing Systems” the Tied & Tickled Trio has delivered their most complex self-portrait of a freely-operating music collective. Altogether, the 15 pieces on “Observing Systems”, some of them not more than highly elaborate and articulate “ideas” , form a very tight system itself – based on musical references, different modi operandi and scientific research – which reaches less and less for an unconditional formal unity. With “Observing Systems” the Tied & Tickled Trio does refine the idea of “space”, both: sonic and spiritual, in which experiences and emotions echo, in a new and ultimately refreshing purity. Sudddenly, what you hear becomes as important as the blanks in the music. In these regions of ruptures and uncertainities a fantastic vision evolves, which leads the Trio through an intense and continuously inspiring musical past. In these ruptures, music history becomes lively again.
On “Observing Systems” invisible, cosmic waves form into distant, eerie sounds, the ghost of the mighty Albert Ayler appears in an old and dust-infested hotel room and a short visit leads us to the “Vienna Cycle”, a group of intellectuals and philosophers in the 1920’s; all these are signals of yet unexplored times and spaces which “Observing Systems” integrates in the sound aesthetics of the “Here and Now”. The term “observing systems” was established in the early 1970’s by the cybernetic and system theorist Heinz von Foerster whose research on the principles of self-organization founded the Cybernetics Of Second Order. According to Foerster, the “observing system” in its relation to the “observed system” always remains in the shadow of its own cognition. Therefore the observation of the observation (the process) leads to a new understanding of the term “reality”. The “observing system”, which observes actively, but at the same time always remains a part of the subjective observation either, ist the perfect metaphor for the modus operandi of the Tied & Tickled Trio. The collective`s self-reflectivity is essential for the transformative modifications of their highly focussed improvisations.
“Organic” is the magical word which serves “Observing Systems” as a theme. Similar to their live album “Electric Avenue Tapes” the Tied & Tickled Trio persues the idea of an “organic” processing. Pieces as “The Long Tomorrow”, “Freakmachine” and “3.4.e” were recorded in the studio with a complete big band line-up – and without any digital post-production. This creates a solid groove which gives the album an almost conceptual and Dub-like depth. “Observing Systems” sounds much rawer and more natural; same with the electronically-produced tracks. The three “Radio Sun” interludes refer not only by its title to Sun Ra`s obscure and intuitive Spacejazz experiments (“Radio Sun” is also a scientific project which transforms solar radio waves into music; “Sun Music” so to speak). The song “Radio Jovian” even sounds like the primordial soup of analogue synthesizer music itself, before piano and sax elevate from the buzzing and brooding drone with subtle poignancy.
“Observing Systems” is music without a center. As in the architectural concepts of “Tensegrity” by Buckminster Fuller each track represents one component in this self-suspending, durable construction, a structure whose strength increases with lightness rather than the heaviness of its components: the album as a whole.
recorded at uphon-studio by Mario Thaler 18-22.08.2002, assisted by Martin Schulze produced and mixed by Andreas Gerth, Markus Acher and Mario Thaler mastered by Michael Heilrath/ Bereich 03
Johannes Enders: tenorsaxophone, flute, piano (all solos except „motorik“)
Ulrich Wangenheim: bassclarinet,flute (all solos)
Stefan Schreiber: tenorsaxophone, clarinet (solo „motorik“)
Gerhard Gschlößl: trombone
Leo Gmelch: tuba, bass-trombone
Andreas Gerth: electronics, processing
Roberto di Goia: piano, organ
Micha Acher: e-bass, trumpet, piano, organ, conducting
Robert Klinger: double bass
Carl Oesterheld: percussion
Saam Schlamminger: zarb
Markus Acher: drums, percussion, sampler, turntables
Caspar Brandner: electronic percussion