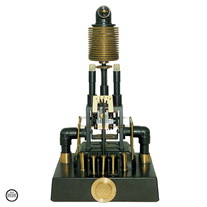 An early record. In retrospective. A remarkable set off back then in 1996. A record that became important in both worlds, indierock and electronic. And a record that was not too serious with homogeneous scenes and sounds. Six musicians from the Bavarian triangle Munich, Landsberg, Weilheim. Six musicians with their hearts and homes rooted in indierock and postpunk, in traditional jazz and contemporary art.
Two of them, Markus and Micha Acher, were and still are part of The Notwist, one of the most important bands mapping alternative music in Germany. Others, Johannes Enders and Ulrich Wagenheim, have studied jazz and composition. Andreas Gerth worked as an artist and sculptor, Casper Brandner a well-known drummer in electronic and analogue projects.
Released on the small Weilheim-based label Payola, the debut of the Tied & Tickled Trio invented a new way of re-arranging old uncle jazz at least for European listeners. Up to then jazz and alternative have come together mostly in a noisy, distorted and fast-driven way, as on the records of John Zorn and his Knitting Factory – or on a side-project of The Notwist called Potawatomi. On their self-titled debut the Tied & Tickled Trio re-lectured jazz in a more complex, more open-minded way. It all was about atmosphere and intensity, about sample, structure and sounds.
Postrock (axis Chicago-Weilheim), Dub (Adrian Sherwoods On-U-Sound), old and even older heroes (Miles Davis, John Coltrane, Herbie Hancock) – the press dropped many names to describe (and to celebrate) this album. All these references faced the early sound of the Tied & Tickled Trio in different, singular moments. But did they face the complexity of a band with open ears and following all of the many directions?
“tusovska dub“ is a vibrating echo chamber, a repetitive track crisscrossed by hidden modulations. “motorik” is a journey into jazz from minimal piano patterns to free floating woodwind instruments. “constant” is a polyrhythmic carpet and the track that shows the complex soundings of the Tied & Tickled Trio best: silent to noisy, far beyond to laid back, old school jazz to electronic postmodernism.
LP version is a co-release by the labels kollaps and payola (edition of 1996)!