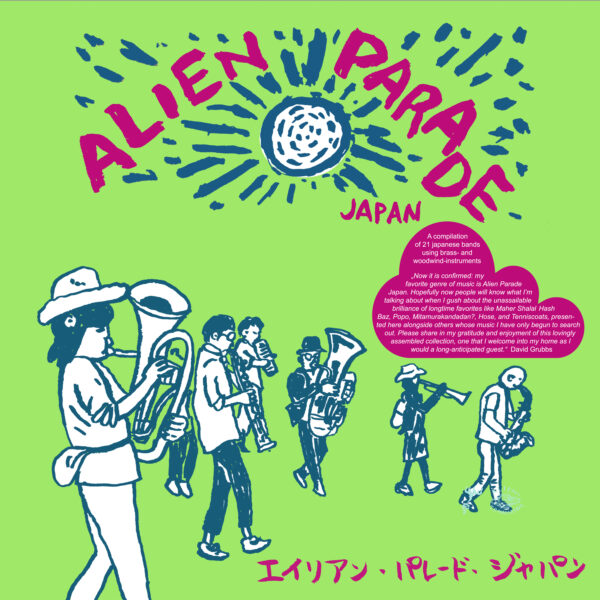 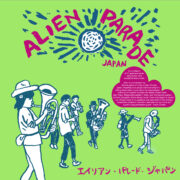 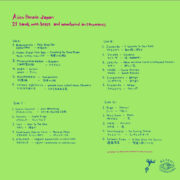 Alien Transistor are proud to present Alien Parade Japan, a joyous double-album compilation of groups from Japan’s indie-pop and avant-garde undergrounds, all of which feature brass or woodwind instruments as part of their line-up. Compiled by Markus Acher (Alien Transistor, The Notwist, Hochzeitskapelle) with plenty of support and help from his Spirit Fest bandmate, Saya (also of Tenniscoats), it features some familiar names – Tenniscoats, naturally, but also Zayaendo, Tori Kudo’s Maher Shalal Hash Baz – alongside lesser-known groups like Biobiopatata, Mitamurakandadan?, Kourakuen, sekifu, and Noah Lewis Mahlon’ Taits, amongst many others.

The collection of songs here rests upon a simple question, and an interesting parallel: Why do so many groups from Japan include brass and woodwind, and how closely does this echo the scene that Acher is involved with in Munich? The idea was formulated in Acher’s mind after one of his groups, Hochzeitskapelle, had been invited by Saya to Japan in 2019, to take part in the Alien Parade Japan tour. “Saya and her friends recommended a lot of music to me that I didn’t know of,” Acher recalls, “and I was surprised and excited to find so many Japanese bands who use brass and woodwind instruments.”

This approach was something Acher had been familiar with for a while, thanks to his experiences in Munich: “Until then I thought of the Munich scene, where [Hochzeitskapelle] come from, as being quite unique in having ex-punk and still-indie musicians form loud acoustic bands with many brass instruments and play a wild mixture of styles.” And indeed, that variety is reflected in the twenty-two songs on Alien Parade Japan, which flits from the pastoral melody of Maher Shalal Hash Baz’s “Crossin The Tama River”, through the tenderness of various sighhorns’s “people have called them flowers”, to the folksy lament of Gratin Carnival’s “Just Watching”.

Alien Parade Japan reaches further afield, too, drawing in some groups, like HOSE, Fuigo, and popo, that feature musicians like Toshihiro Koike, Masafumi Ezaki and Taku Unami, who may be better known for their experimental and improvised releases on labels like ftarri and Erstwhile. It also looks back to material recorded in the 1990s – the swinging slide guitars and sax/tuba duet of Strada’s “Swamp”, from 1998, and Compostela’s energetic, rousing “ghhgh”, from 1990. Both pieces were written by, and feature, saxophonist Kanji Nakao; Compostela’s membership also included late saxophonist Masami Shinoda, who was also part of such storied Japanese groups as Pungo, A-Musik, Orquestra Del Viento, Ché-SHIZU, and the fiery free jazz outfit, Seikatsu Kōjyō Iinkai.

Groups like Compostela help to draw some through-lines to the aesthetics of chindon’ya, a type of Japanese marching band made up of costumed street performers who advertise businesses; the music made by these bands is brash, spirited, and full of energy. Alien Parade Japan weaves all of this together – chindon’ya; jazz; indie-pop; psych-folk; big band – into one beautiful, big tapestry of gorgeous melody, sweetness, and melancholy, with plenty of creative fraying at its edges. “The collection is a very personal view of Japanese bands using brass and woodwind instruments,” Acher concludes: “[it’s] not a representative anthology, it’s mainly held together by my personal taste, experiences, and friendships.” But it’s also a wonderfully coherent collection of some of the most playful and elated music you’re likely to hear this year. As musician and writer David Grubbs says, “Now it is confirmed: my favourite genre of music is Alien Parade Japan.”