What are people for 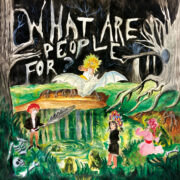 What Are People For? make the perfect kind of dystopic dance music for our times. Born from a collaboration between artist Anna McCarthy and musician/producer Manuela Rzytki, the band could be the illicit lovechild of Tom Tom Club and Throbbing Gristle, displaying the ideal balance of hip shaking vibes and dark provocative content.

On their collaborative debut, McCarthy and Rzytki share songwriting duties. The album was produced by Rzytki herself. They are joined by Paulina Nolte on backing vocals and Tom Wu on drums, while Keith Tenniswood mastered the record.

The whole project stems from a publication and exhibition by McCarthy laying the foundations for the content and lyrics of the album, which is humorous, poetic and political. As a lyricist, McCarthy uses her storytelling ability to explore anxieties and desires, digging into free surreal word associations reminiscent of Su Tissues’ tongue in cheek experiments with Suburban Lawns, but also explosive and gripping like a Kae Tempest rap.
Rzytki’s precise sonic palette and talent at penning structured bangers perfectly complement McCarthy’s playful and subversive language manipulations. Rzytki’s beats are rooted in old school Hiphop loop principles and an authentic love for the analog. Her use of an array of synthesizers and other “real” instruments adds to WAPF’s depth, soul and sincerity.

The album opens with a joyful anthem, full of energy and melodic hooks. The audience is confronted with the quintessential titular question What Are People For? and told that they are just a mere disposable commodity. Throughout the album, lyrical themes revolve around underground aspects of society, violence, political ideologies, sexuality and mysticism. The content is deep but the album is as danceable as it is biting.

73, with its drum machine hysteria and hypnotic synth basses is a a text collage written on the 73 bus through London, consisting of situations and conversation snippets encountered along the way. Drones indulges in the narrator’s paranoia as they feel they are being watched by cigarette machines, whilst the haunting choir is half spoken, half sung, ending on the orgasmic chanting of the word “mummy”. Nursery Rhyme brings more soothing incantations. There is definitely an affinity for fairytales, albeit adult ones and especially the anarchistic ones such as The Moomins, who were a consistent influence on the band. The artwork for the record, created by McCarthy, is a beautiful children’s book-style painting of the group in a forest, seemingly about to engage in a magical encounter to which we are invited.

WAPF? have absorbed and digested a variety of influences. Trip hop, Punk and Techno are rubbing shoulders on Party Time. 1977 was coined “Summer of Hate” in the UK and unsurprisingly in WAPF?’s Summer of War, ethereal singing alternates with a powerful marching Garage/Grime chorus reminiscent of street protests and UK culture.

Mz. Lazy starts like an invitation to meditation and references Gertrude Stein’s book Ida in which she develops the idea that publicity is a new religion and people are now famous for being famous. Repressed anger explodes into violence and freedom at the end of the song as our heroine eventually grabs an axe to destroy her oppressors.
Fantasize, on its part, is raw, sexual and liberating while the closing track Bring Back the Dirt is a welcome hymn into a world that is becoming more and more sanitised.

While exploring deep subject matters throughout their album, WAPF? manage to remain satirical, exciting and funny. Each and everyone of their songs have a cathartic quality.

The visual identity of the band is intrinsic to their appeal. Live, they are eccentric, wild and unapologetic, wearing see-through costumes, bright miniskirts and intricate headpieces while delivering their songs with sharp intensity. Their performances radiate queer sexiness and transcend B52’s thrift store aesthetics, creating a space for collective dreaming.

WAPF? is a rare combination of contemporary punk energy, irresistible groove, absurdist dry humour and astounding depth of field. They have the mighty power to create a party with their music and soon you will find yourself lifting your arms as if controlled by an external force, to chant: WAPF? WAPF? WAPF?